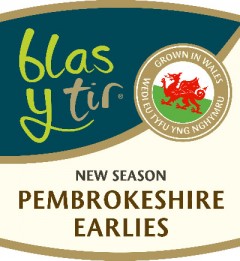 The famous Pembrokeshire Early Potato has joined the ranks of Champagne, Parma Ham and Melton Mowbray Pork Pies by being awarded protected food name status by the European Commission.

The application for PGI status was made to the European Commission by DEFRA on behalf of Haverfordwest based majority farmer-owned company Puffin Produce Ltd.

Achieving PGI status is a long and complicated procedure, and Puffin has been helped through the process by the Welsh Government. .

Through its ‘Blas Y Tir’ (Taste of the Land) brand, the company has been spearheading the campaign to re-invigorate the place of the Pembrokeshire Early Potato on the plates of Wales and further afield.

Pembrokeshire Earlies have been grown in the county’s fertile red sandstone soil since the mid-1700s and it is one of the county’s most treasured products.

“Preparing the seed and soil then planting, nurturing and harvesting these special potatoes is both a science and an art,” said Puffin’s field manager, Stephen Mathias.

“The growers have an innate knowledge of the local growing conditions and many skills have been passed down from one generation to the next.

“The potatoes are often handpicked especially earlier in the harvest season. Maris Peer and Lady Christl varieties – among others – are ideal for the Pembrokeshire soil, climate and production methods. The result is a tiny (15-70mm diameter) bright white potato, creamy in texture and so fine-skinned that the first crop harvested in May in its purest earth covered form, to keep its delicate skin intact.”

These first of the season Pembrokeshire Earlies have a distinctive nutty flavour and aroma.

“The Pembrokeshire Early potato is one of the best products in Wales,” said Puffin’s managing director, Huw Thomas.

“Achieving PGI status has been a long and rigorous process, but we’re absolutely delighted with the outcome and we can’t wait until next year’s Pembrokeshire Earlies to celebrate in style.”

“Consumers can now be absolutely sure that when they buy Pembrokeshire Early Potatoes they are getting a product which has been grown, picked, and packed in Pembrokeshire.

“This is tremendous news for Wales, Pembrokeshire and our growers who put their heart and soul into producing the best potatoes and vegetables you’ll find anywhere in the world.”

The PGI designation puts Pembrokeshire Early Potatoes on a par with Welsh Lamb and Welsh Beef, which also received protection under European law.

Added Huw Thomas, “You could say we are now three quarters of the way to having a full PGI dinner from Wales!”

“This excellent news yet again demonstrates some of the world class food Wales has to offer.”

Pembrokeshire Earlies grower, Walter Simon welcomed the PGI news saying it “recognises the quality of the product and the hard work and dedication of growers in Pembrokeshire and it is great that horticulture in West Wales is being recognised in this way.”

He added, “The discerning public will recognise the PGI logo from other great products around Europe which have a special connection to their locality – such as Welsh Lamb which has a reputation world-wide.”

Pembrokeshire County Council Food Development Manager, Kate Morgan said, “Pembrokeshire Earlies have a proud history in this part of Wales and we are delighted that ‘one of our own’ food products has been recognised by Europe in this way.”

Said Caroline Evans of the Potato Council, “Shoppers continue to be interested in provenance and it presents opportunities to build interest and excitement in the potato category. It is good to see Pembrokeshire growers investing in their identity and being recognised with PGI status.”

Haverfordwest based Puffin Produce Ltd evolved from the Pembrokeshire Potato Marketing Group, a grower’s co-operative formed in the 1970s. Puffin Produce was created in 1995 and has remained true to its collective roots being majority-owned by Welsh growers.

The company’s ‘Blas Y Tir’ (Taste of the Land) brand was launched by Puffin Produce in 2011 in response to demand from Welsh shoppers and retailers.

Now available in most multiple retailers in Wales the brand encompasses a range of vegetables including the True Taste Award-winning Estima baking and aptly named Rudolph potatoes, also leeks, cabbage, cauliflowers, swede, spring onions, and daffodils, and of course the flag-ship Pembrokeshire Earlies.

Targeted marketing has seen the brand achieve a retail sales value in excess of £8 million in the space of two years and continues to grow at over 200 per cent year on year.

With Welsh Government and European Union support some £8.4 million in capital expenditure has been invested in the company, and Puffin has increased its volume sales by 50% and the workforce has expanded from 55 to its current 107 members.

The EU protected food name scheme was rolled out throughout Europe in 1993.

There are three designations under the Protected Food Name (PFN) umbrella:

There are currently 55 PFNs in the UK with around another 40 in the pipeline of which potentially 20 are Welsh products.

The Welsh Government funds support to Welsh producers wanting to attain PFN status, this support is delivered by ADAS.