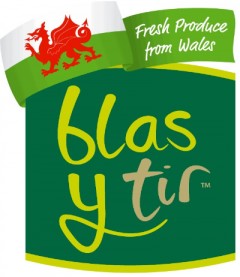 Potatoes, cabbage, cauliflower and leeks will take to the small screen next week as part of a campaign to get more people eating Welsh vegetables this season.

The advert will have its first airing next Monday, (December 2nd) on ITV1 during ‘This Morning’ and will be seen at peak viewing times during breaks in programmes such as soaps ‘Emmerdale’ and  “Coronation Street’ and ‘I’m A Celebrity Get Me Out Of Here!’

The advertisement features a variety of vegetables grown in Wales including Savoy Cabbage, Swede, Leeks and the award-winning and aptly festive-named Rudolph potatoes.

“Our latest campaign builds upon the tremendous response we had to our first television advertisement back in the summer for our Pembrokeshire Early Potatoes,” said Puffin’s managing director, Huw Thomas. “This time we have expanded the campaign to include the whole range of Blas Y Tir branded vegetables on sale here in Wales.”

He added, “Turkey may take centre stage on the Christmas dinner table, but it would be nothing without piping hot, delicious vegetables by its side. We want to make people aware of the wonderful range of Welsh-grown vegetables available on their door-steps and give the forthcoming festive season some extra hwyl.”

If you would like a preview of the advertisement please go to:

The ‘Blas Y Tir’ (Taste of the Land) brand was launched by Puffin Produce in 2011 in response to demand from Welsh shoppers and retailers.

Puffin Produce evolved from the Pembrokeshire Potato Marketing Group, a grower’s co-operative formed in the 1970s. Puffin Produce was created in 1995 and has remained true to its collective roots being majority-owned by Welsh growers.

With Welsh Government and European Union support some £8.4 million in capital expenditure has been invested in the company, which has seen business grow by 50% in the last two years and staff numbers increase from 50 to 107.