The four young rugby players – who play in the outside half position for Pembrokeshire’s County School U15 Team – were chosen by Haverfordwest based Puffin to take part in the kicking master class at Cardiff’s Millennium Stadium as part of Wales star Ryan Jones’ testimonial year programme.

Danny Rawlings from Hook, Dion James from Cilgerran, Aaron Cookson from Cosheston and Danny Wainwright from Manorbier travelled to Cardiff for the experience of a lifetime.

“We purchased the kicking master class opportunity at charity auction and decided to offer it to some young rugby stars from local clubs,” said Puffin’s managing director, Huw Thomas.

“It was a tremendous experience for them and one I’m sure they won’t forget, an maybe we’ll see them wear the red jersey of Wales in a few years time!”

Ryan Jones said he was impressed with the youngsters, “I thought they were fantastic, really good. I think they learned a thing or two from our boys.

“They have the potential and now have to go away and work at it.” 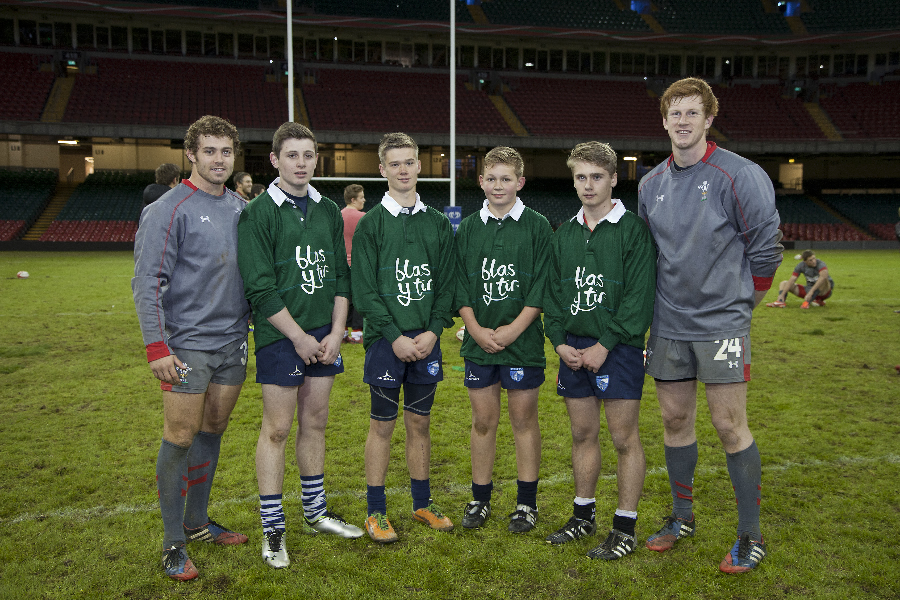 Haverfordwest based Puffin Produce Ltd evolved from the Pembrokeshire Potato Marketing Group, a grower’s co-operative formed in the 1970s. Puffin Produce was created in 1995 and has remained true to its collective roots being majority-owned by Welsh growers.

The company’s ‘Blas Y Tir’ (Taste of the Land) brand was launched by Puffin Produce in 2011 in response to demand from Welsh shoppers and retailers.

Targeted marketing has seen the brand achieve a retail sales value in excess of £8 million in the space of two years and continues to grow at over 200 per cent year on year.

With Welsh Government and European Union support some £8.4 million in capital expenditure has been invested in the company, and Puffin has increased its volume sales from 20,000t to over 35,000t per year.