Welsh wine is now of such a high standard it should be judged against not just national but international competition.

That is the view of Roger Jones, Michelin starred chef and head judge at the inaugural Welsh Vineyard Association competition.

The competition, which was held at Llanerch Vineyard in the Vale of Glamorgan, drew entries from vineyards across Wales.

The entries were blind tasted by the trio of expert judges – which included Bill Gunn former Managing Director of the famous Champagne producer Pol Roger, and Julie Bell from the Felin Fach Griffin near Brecon – and marked using the rigorous Decanter World Wine Awards format.

Praising the high standard of entries, Mr Jones who is a Decanter World Wine Awards senior judge, said the vineyards had taken a risk by putting their wine up for such exacting scrutiny, but told them “it was a risk you have got to take.”

The 35 entries were split into three classes: Still White or Rosé, Red, and Sparkling.

A total of 15 Bronze Medals, 5 Silver Medals and one Gold medal were awarded – the Gold medal being awarded to Ancre Hill Estates’ 2009 Sparkling Rosé. (A full list of winners may be found at the end of this release)

“Any wine receiving a gold or silver had to have the same mark from each judge,” said Mr Jones. “We were very impressed with the entries and believe these wines should be judged not just against England but on the world scene.”

“There is a massive opportunity for the Welsh industry to develop and our aim is to make this Welsh competition an international event,” said WVA chairman Richard Morris, who with his wife Joy runs the multi-award winning Ancre Hill Estates vineyard near Monmouth, and whose Sparkling White was named ‘Best White Sparkling Wine in the World’ at the Bollicine del Mondo International competition in Italy in 2012.

“By making this an international competition Welsh wine by association will be recognised as world class,” said Mr Morris. “We also want to widen the WVA to non vineyard-owning members.”

The newly re-formed Welsh Vineyard Association (WVA) was launched in May with support from the Welsh Government, and already 14 out of Wales’ 17 vineyards have joined the Association. The Welsh Government has also helped to establish Wine Trail Wales, which features 16 vineyards in Wales and also to promote Welsh Wine Week. www.winetrailwales.co.uk

Tourism is also an important part of the operation of the Welsh vineyards.  Parva Farm Vineyard in Tintern recently received a Monmouthshire Tourism Business award.

It is an area Mr Morris said the WVA is very keen to explore through its Welsh Wine Trail, and hopes to attract interest from as far as the USA and Canada through its links with luxury and boutique hotel group Welsh Rarebits.

“We are very excited about the future of the Welsh wine industry. We are in a similar position to that of the New Zealand industry 50 years ago which today has an export market worth one billion NZ dollars per annum and supports 20,000 jobs,” said Mr Morris.

Ryan Davies, owner of Llanerch Vineyard, which hosted the awards, said it had been a very successful first event for the WVA, “it was a great day with fantastic wines from across Wales.”

Photo Caption: Welsh vineyard owners celebrate at the inaugural Welsh Vineyard Association wine competition, which was held at Llanerch Vineyard in the Vale of Glamorgan. 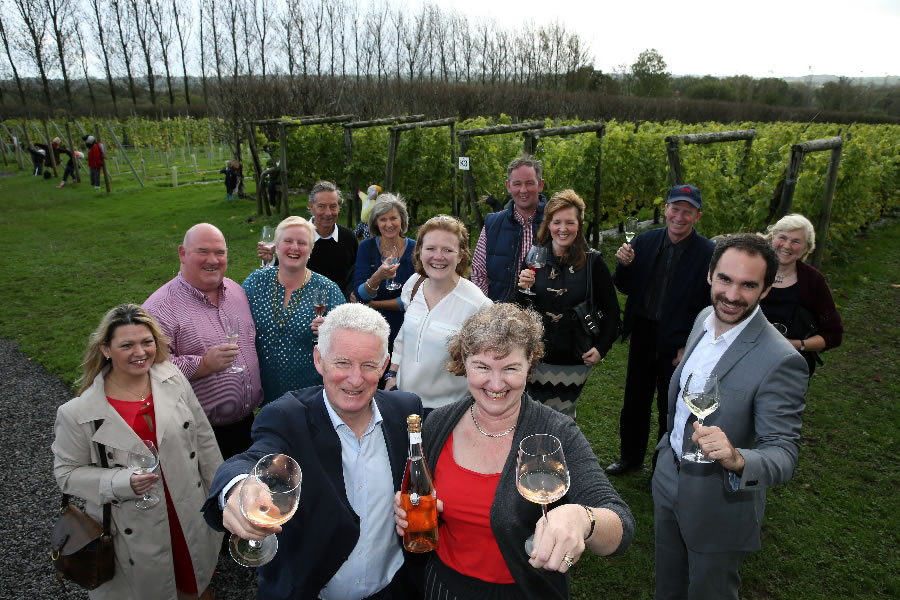 For more information about the WVA or the competition please contact:

Head judge and Michelin starred chef Roger Jones is chef patron of The Harrow at Little Bedwyn. A Decanter World Wine Award senior judge, Mr Jones, who is originally from Lampeter, is a member of the Decanter Tasting Panel as well as a judge on Imbibe’s Sommelier Challenge and is currently Vice Chairman of The Master Chefs of Great Britain, and was recently appointed consultant chef at The Park House in Cardiff.

Julie Bell is from the Felin Fach Griffin near Brecon which won the Best Pub Wine List of the Year award at the 2012 Imbibe awards.

More than 20 different grape varieties are grown in Wales with Welsh vineyards producing around 100,000 bottles of wine each year.

The Romans and French monks are said to have introduced wine to Britain, but it was Lord Bute who is credited with planting Wales’ first commercial vineyard in 1875 at Castell Coch near Cardiff.

In recent years Welsh wine has taken centre stage at major political events, most notably when Britain held the Presidency of the European Union which saw Tintern Parva from Monmouthshire served at the European Summit meeting, and wines from the Vale of Glamorgan’s Glyndwr Vineyard are served in the House of Lords’ and have graced European State banquets.

Many vineyards welcome visitors for tours and tasting sessions as part of Wine Trail Wales. For more details go to www.winetrailwales.co.uk