The Anglesey based company, which has customers worldwide, is to receive its award for its excellence in International Trade in recognition of its increased year on year export sales.

“We are absolutely delighted to win this award, it really is an honour,” said David Williams, director and founder of Plas Farm.

The highest award that can be bestowed on a company the prestigious awards are made annually by Her Majesty The Queen, and are only given for the highest levels of excellence demonstrated in each category.

Said Mr Williams, “This award puts Plas Farm among an elite group of UK companies. It will be a tremendous boost to us and a sign to our customers of the quality of our frozen yogurt and of our business achievements.” 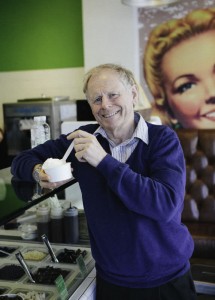 Originating in the USA, creamy, yet fat-free, frozen yogurt has become an international dairy success story, and Plas Farm has become the sector’s European leader.

From its 18,000 sq. ft. purpose-built base at Gaerwen the company makes a range of frozen yogurt products including soft mix yogurt for use in soft serve machines, frozen yogurt for smoothies, yogurt portions for blending and scooping yogurts for both foodservice and retail.

Plas Farm has been producing frozen yogurt for more than 30 years, when dairy farmer David Williams switched to producing chilled yogurts and cheeses. Now the company has a £2 million turnover and employs 20 full-time staff.

Said Mr Williams, “We have doubled our production over the past two years and export sales have increased from around 5% of our turnover to about 40%.

“The sector has really taken off, indeed the frozen yogurt market in Europe was almost ten times bigger in 2013 as it was in 2008.

“For us the biggest export markets are Sweden, Ireland, Germany, Pakistan and Cyprus, and we also have customers also in Tanzania, Greece, Spain, Norway, France, and Qatar.”

The growth in export orders has coincided with the company’s increased activity at international and trade events, taking the opportunity to exhibit under auspices of the Welsh Government’s Food & Drink Wales banner and stand at events such as Anuga in Cologne and SIAL in Paris and last month’s Food & Drink Expo in Birmingham.

Said Mr Williams, “We supply 40 different flavours to self-serve FroYo bars where customers are looking for a zero-fat, healthier alternative to ice cream. The FroYo bar market is an area which has really taken off both in the UK and Europe, particularly so in Sweden and Germany.”

Added Mr Williams, “We are really grateful to our UK customers for helping us develop the frozen yogurt concept and provide such a sound platform from which to take our business further afield.”

About The Queen’s Award for Enterprise
Approximately 160 Queen’s Awards have been announced for outstanding business achievement in the fields of International Trade, Innovation and Sustainable Development.

For more information about The Queen’s Awards visit www.queensawards.org.uk