The President of the National Farmers Union (NFU) has leant his support to a Midlands children’s school farm that is under threat from the current crisis in the dairy industry.

NFU President, Meurig Raymond, was clearly impressed as he toured the dairy unit at Mount Pleasant School Farm at Forhill on the outskirts of Birmingham. He was struck by the detrimental effect the dairy crisis is having on the charity-run children’s education centre.

Mount Pleasant School Farm provides a unique opportunity to give city children an insight into food, farming and the countryside, and is one of the few dairy farms remaining so close to Birmingham.

It is owned and run by The Worgan Trust which was set up by the Cadbury family in the 1960s as a means of teaching inner city children about farming, food and the countryside, since then more than 400,000 children have enjoyed and benefitted from the experience.

As he toured the site Mr Raymond discussed the dairy crisis with Mount Pleasant’s tenant farmers Peter and Emma Charles, and learnt of its knock-on effect on the school farm.

Mr Raymond promised to take Mount Pleasant’s message to the highest level and to stress the importance of the dairy farm, the classroom and the educational value.

“Mount Pleasant does not work without it (the dairy farm) it’s so important, it is education at its best, “ he said.

However, while the dairy industry is in dire straits he reassured Peter and Emma that the situation will eventually improve.

“There’s no doubt about that. It’s when is the big question. Hopefully the milk price has stabilised, demand will grow and that demand should rise by 2-3% per year.”

Peter highlighted the volatility of the situation saying, “We are making significant losses and there is not enough money coming in to pay the bills. It can’t carry on as it is, we can’t be in a situation where every two years we are left in a loss making situation. It has either got to be viable and steady viable rather than just a profit one year in three.”

In addition to the working dairy farm the centre also includes a £500,000 purpose-built classroom, where teaching focuses on the new curriculum Key Stage One and Two Design and Technology element – understanding where food comes from.

Worgan trustee Julian Salmon asked Mr Raymond to take the message of Mount Pleasant’s crisis back to the highest level in his capacity as NFU President.

“Using milk as a weapon in price wars puts at risk what could be the only chance for future generations of Birmingham’s children to learn first hand about the countryside and farming in this classroom environment.

“To lose it would strike a blow for core (important) values in the new curriculum. We urge schools to support this wonderful educational facility and consumers to support the dairy industry.” 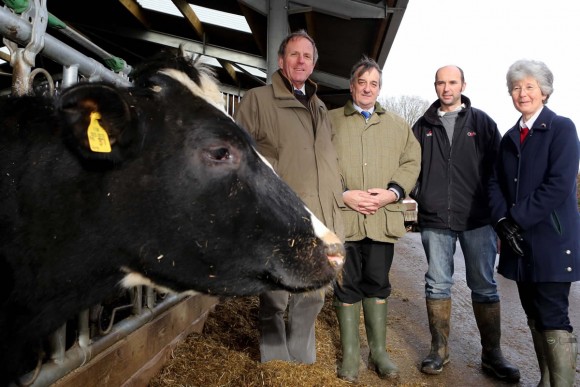 The Worgan Trust charity was set up by philanthropist Paul Cadbury in 1967 to protect and preserve land around Birmingham.

In 1972 Mr Cadbury, in conjunction with the City of Birmingham Education Department, started a Farm School at Chapman’s Hill Farm.

During the past 40 years more than 400,000 inner city primary and secondary schoolchildren from the Birmingham area have visited the original site at Chapman’s Hill, its sister unit at Money Lane, and latterly Mount Pleasant.

In 2008 the Worgan Trust made the decision to move to a bigger dairy farm – Mount Pleasant Farm – on the Bournville Village Trust estate – and built a £500,000 state of the art environmentally friendly classroom.

The Bournville Village Trust manages almost 2,500 acres of agricultural land including five farms in the green belt between Birmingham and Bromsgrove at Groveley, Chadwick and Weatheroak.

Mount Pleasant School Farm, on its Weatheroak Estate near Kings Norton provides a rare opportunity for children and other organised groups to visit a dairy farm and learn where milk, beef and other food products come from, and bring their classroom studies to life.

The dairy crisis poses yet another threat to Mount Pleasant which, up until July 2014, was run in partnership with Birmingham City Council’s Outdoor Learning Service.

BCC provided the teacher until controversial budget cuts resulted in the closure of the service.

Mount Pleasant now operates independently and is totally funded as a charitable trust by The Worgan Trust.

Mount Pleasant is one of the few dairy farms remaining so close to Birmingham, in North Worcestershire. The dairy enterprise is vital to the economic viability of the farm and essential to the school children’s learning experience, in that it is a working, operational, dairy farm.

Visits are designed to complement the schools’ ongoing work in relevant areas of the National Curriculum. Nina Hatch is the teacher/Centre Manager who arranges and structures the educational aspects of the farm.

Tenants Peter & Emma Charles both work on the farm and have three young daughters, Georgina, Lucy and Megan. The farm is commercially run and, as such, the herd has had to increase from 70 cows at the outset in September 2006 to the present 200 plus 160 followers.

Peter owns all the cattle and machinery and pays rent to the Bournville Village Trust for the land and buildings. The farm provides the family’s living and is a typical modern unit, but also designed to educate and inform.

The current dairy crisis is putting the business and its educational value in jeopardy. The price paid by Arla for the 150,000 litres produced each month has dropped by at least eight pence a litre.

The December milk cheque was £2,000 less than the November cheque and means the farm is running at a loss, even though monthly costings prove it is in the top 25% of the UK’s most efficient dairy farmers.

It means the family have had to economise and work harder. They have had to cut back on help on the farm and are faced with an ever-increasing overdraft. The crisis has deepened over three months, just two years after the last crisis.

The dairy cows and the family moved from Chapmans Hill Farm, Romsley in February 2007. The family still rent the 150-acre Chapmans Hill from the Worgan Trust where dairy young stock are winter housed.

There are also pigs, sheep, chickens and a pony to complete a child’s insight into how food production, farming, the countryside and nature are mutually sustainable.