Originating in the USA, the frozen yogurt market has taken-off worldwide with sophisticated frozen yogurt bars growing rapidly in the UK and Europe.

The Plas Farm story began in the early 1980’s when dairy farmer David Williams switched to producing chilled yogurts and cheeses. It was an insightful diversification as today the company is the UK leader in the manufacture of zero fat, probiotic frozen yogurt.

From its 18,000 sq. ft. purpose-built base at Gaerwen the award-winning business makes a range of frozen yogurt products including soft mix yogurt for use in soft serve machines, frozen yogurt for smoothies, yogurt portions for blending and scooping yogurts for both foodservice and retail.

It is a rapidly growing market, in which Plas Farm has become a sector leader – expanding its range, selling to an ever increasing domestic and export customer base, and doubling its production over the past two years.

Attendance at food trade events is key, and Plas Farm has been helped by the Welsh Government to visit key markets and make vital contacts . Through exhibiting on the Food and Drink Wales stand at events at home and abroad Plas Farm has been able to position itself at the heart of the frozen yogurt industry.

“Without support from the Welsh Government we would really struggle to make the most of the opportunities to be had at trade exhibitions abroad. We are part of a real showcase of Welsh products,” says Rhian.

“Since we started exhibiting at large food exhibitions with the Welsh Government our export sales have increased from around 5% of turnover to about 40% of turnover. A large part of this is due to the exposure, meeting opportunities, and leads generated by exhibiting at the shows.

“Not only does exhibiting as part of the Welsh stand give us a custom built and professional looking stand – it also provides that extra support.

“We’ve exhibited as part of the Welsh stand at both Anuga in Cologne and SIAL in Paris, and the support from the Welsh Government staff has been terrific. It’s the little things that make the biggest difference to us – the running water, small kitchen area, and storage.

“They take care of everything from advice on sales to logistical support allowing us to focus on preparing for the show and targeting appropriate buyers and welcome them to a professional and organised stand area.”

For Plas Farm attendance at international events has been translated into orders from customers across the world.

“At SIAL we met with two significant French contacts who have subsequently become customers, selling soft serve frozen yogurt all over France.  While one of our biggest European customers came as a result of a meeting at Anuga, where we also made good contacts from the Middle East, Asia and Scandinavia.

Closer to home at the International Food Exhibition (IFE) in London, Plas Farm’s presence on the Food and Drink Wales stand at the bi-annual show allows them to keep in close contact with the UK market.

“We invite all of our London-based customers and at least half of them will drop by the stand for a chat and to see what else is on offer at the show. It is a vital point of contact for us with our customers, and provides an efficient and professional environment in which to meet them.

“Next month (March 24-26) we will be exhibiting on the Food and Drink Wales stand at the Food & Drink Expo in Birmingham, and we are looking forward to meeting existing customers as well as hopefully forging new links.

“Now that we’re seeing frozen yogurt take hold outside of London we expect it to be a very busy show with visitors from across the UK.

Timing, says Plas Farm director, Rhian Williams, has been crucial to the company’s development, with investment made in products and manufacturing facilities contributing to its £2 million turnover.

“With funding from the Welsh Government we were able to build an extension and triple our frozen storage capacity, without it we would not have been able to meet the growing worldwide demand for frozen yogurt.

“The increased freezer storage in particular helped us increase production capacity and grow with the market as opposed to getting left behind.

“Luckily we were able to have the freezer built just in time for the “boom” in sales, and we haven’t looked back!”

Future plans include new products such as high protein frozen yogurts and dairy-free dessert options, it is hoped these developments, combined with increased sales, will lead to more staff joining the current 20 full-time employees.

The company – which also produces dairy ice cream and chilled salads – exports its frozen yogurt across the world, with its biggest markets being Sweden, Ireland, Germany, Pakistan and Cyprus, and customers also in Tanzania, Greece, Spain, Norway, France, and Qatar.

“People questioned at first whether the UK and Northern Europe’s notoriously poor weather would prevent frozen yogurt from catching on, but those fears have proved unfounded as the soft serve frozen yogurt market has exploded.

“Over the last five or six years the bulk of the growth has been in the soft serve market, but now we’re seeing retail frozen yogurt start to establish itself too. Supermarkets across Europe are now starting to stock frozen yogurts, and it is showing some unexpected trends!”

Starting in London its popularity has spread across Europe, and while initially confined to the biggest cities has spread from shopping centres to seasides, and from high streets to hamlets.

Says Rhian, “Our own experience at Plas Farm tells us that growth since 2008 has been somewhere in the region of 1000%, with the frozen yogurt market in Europe was almost ten times bigger in 2013 as it was in 2008.” 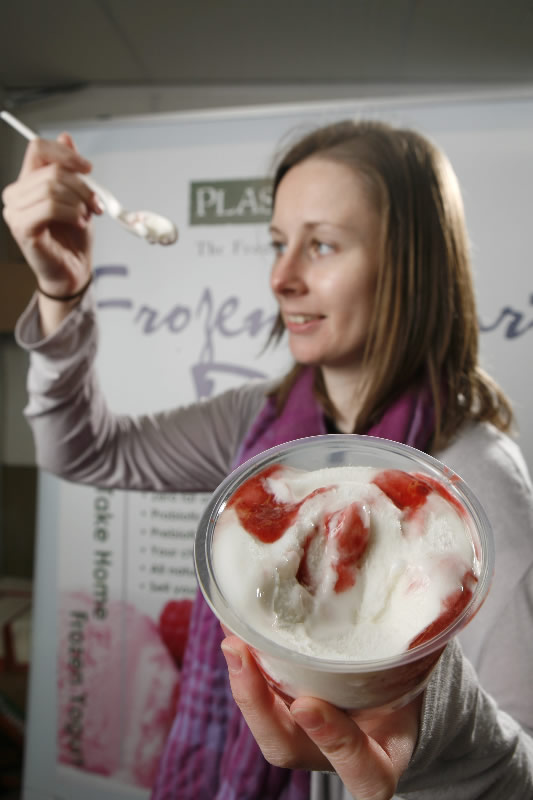 For more information about Plas Farm Ltd and its products please contact: