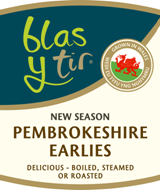 They are one of the flavours of summer, and visitors to next week’s Royal Welsh Show will be able to sample some delicious Blas Y Tir Pembrokeshire Early Potatoes.

The taste and aroma of new potatoes served with butter and herbs is hard to beat, and the Pembrokeshire Early Potato is deliciously simple and irresistibly Welsh.

Through its ‘Blas Y Tir’ (Taste of the Land) brand, Haverfordwest based Puffin Produce Ltd is spearheading the campaign to re-invigorate the place of the Pembrokeshire Early Potato on the plates of Wales and further afield.

“The Pembrokeshire Early is one of the best products in Wales, and they can go from field to store in just 24 hours,” says Puffin’s managing director, Huw Thomas.

Harvested earlier than most other UK varieties, the secret lies in Pembrokeshire’s mild coastal climate, which provides the perfect growing conditions for Pembrokeshire Earlies. 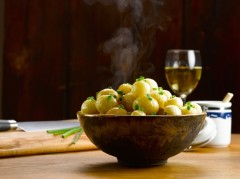 Visitors to the Royal Welsh Show will be able to sample the piping hot potatoes for themselves as well as pick up serving tips to get the best out of the iconic Welsh potato, which it is hoped will soon have its name protected by European law.

“We have been focussing heavily on promoting Pembrokeshire Earlies, and we hope that within the next six months they will be granted Protected Geographical Indication (PGI) status which will mean only Pembrokeshire Early Potatoes grown here can be labelled as coming from Pembrokeshire.”

Says Huw Thomas, “We hope the advert will help us take Blas Y Tir sales to the next level, and follows an overall sales increase for the brand of 300% over the past 12 months. We have also started working with a wholesaler in London to open up new distribution channels for the Pembrokeshire Earlies,”

“We are developing a number of great tasting varieties of vegetables to add to the Blas Y Tir brand, and our key ambition is to expand our range of Welsh grown vegetables through major multiples and provide as much fresh Welsh produce to consumers as we can.”

“It is an exciting time, we’ve added swede and recently spring onions to the range and over time, we hope to grow even more types of vegetables.” says Huw.

Puffin Produce evolved from the Pembrokeshire Potato Marketing Group, a grower’s co-operative formed in the 1970s. Puffin Produce was created in 1995 and has remained true to its collective roots being majority-owned by Welsh growers.

With Welsh Government and European Union support some £8.4 million in capital expenditure has been invested in the company, which has seen business grow by 50% in the last two years and staff numbers increase from 50 to 80.

“The investment has enabled us to increase capacity and efficiency which means that we are now able to supply all the major retailers in Wales,” says Huw. “We aim to expand the business even further and we are keen to build links with farmers looking to add value to Welsh produce and provide our fantastically loyal consumers with even more quality Welsh grown potatoes and vegetables.”

To find out more about Pembrokeshire Early Potatoes and the Blas Y Tir range visit our consumer stand in the Food Hall (number 18) or our trade stand in the Green Pavilion at the Royal Welsh Show or log on to www.blasytir.com